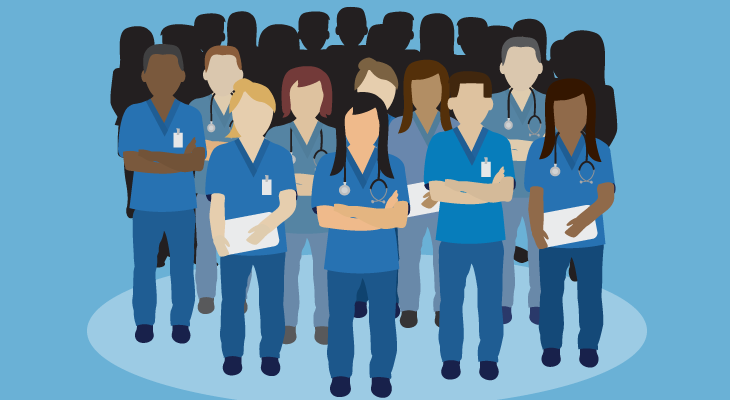 We’ve reached an inflection point in the nursing industry. For years, a cycle of bullying has continued where veteran nurses often being hard on rookies. Now, the attitudes of seasoned nurses on bullying are starting to change toward nursing mentorship.

In just under two months, nearly 9,000 people have signed a pledge to change the culture in nursing environments, promoting the phrase, “Nurses Support Their Young.” From nurses in hospitals to private practices and everywhere in between, the healthcare industry is coming together to say, “enough is enough.” In 2018, nurses were breaking through barriers to eliminate workplace bullying and create a positive working environment where nurses can thrive, and patients can receive the best care possible.

Why Do Nurses Eat Their Young?

One detail about the nursing establishment that people on the outside may not realize is that bullying between nurses is a well-documented problem. In the past, it was common for experienced nurses, some of whom were burned out from working long shifts under high-pressure conditions, to put down new nurses or otherwise impede their work. At the same time, there was a stigma against speaking out that enabled the bullying cycle to continue.

Research published in 2016 from American Sentinel University found that 60 percent of new nurses quit their job within the first six months due to bullying from co-workers. The same study found that almost 50 percent of nurses felt they would experience bullying at some time in their careers. In a thread on the social media website Reddit, multiple nurses said they were bullied by a preceptor, an experienced nurse who helps onboard new nurses into a unit.

“(Peer accountability) means that I care just as much about my success as a nurse as I care about yours, and we all care about the success of our team because we need to provide the best care possible. We must respect each other for where we are in the learning process, and foster opportunities to improve rather than degrading each other.”

“I’m fresh out of nursing school, and I work in pediatrics, and not a single nurse on my unit has given me a hard time. When I made mistakes, they helped me through it and explained why it’s done a certain way.”

However, that’s starting to change in favor of nursing mentorship. Veteran nurses across the country are working to develop healthy, positive, and supporting environments for new nurses and take on the role of nurse mentor. In 2015, the American Nurses Association (ANA) published a position statement formally opposing bullying in nursing and outlining steps to eradicate it from the practice. These include:

The ANA also created a Nurses’ Bill of Rights, which includes seven principles surrounding expectations for the workplace. The document, while not legally binding, establishes a framework on which nursing policies can be built and provides nurses with support should a troubling situation arise. The ANA is promoting positive behaviors not just exclusively among nurses, but all healthcare professionals and medical industry stakeholders to help change the culture. Nurses are being encouraged to make a personal commitment to being part of that change, and it’s growing across the country.

The Survival Guide for Your First Year as a Nurse

King University’s guide, How to Survive and Thrive as a New Nurse, gives you exclusive access to interviews with actual nurses on thriving during the early years of a nursing career. This guide includes tips for dealing with stress, a breakdown of day vs. night shift, what to expect in your first year – and it’s all free.

It’s understandable for there to be anxiety within a nurse’s first few months on the job. For many of the reasons that aspiring nurses enter the field (i.e., providing and caring for others in their time of need). The overall weight of the position’s importance can lead to anxiety-filled days, which then becomes more stressful when working in a hostile environment.

Though not an official disorder, new nurse anxiety is nonetheless a real issue for many entering the field. It’s even been documented from nursing students when they’re first introduced to clinical settings. A separate study published in Clinical Nurse Specialist found that 18 percent of hospital-employed nurses reported depressive symptoms, which is twice as much as the general population.

New nursing anxiety can be avoided, or at least lessened, with healthier nursing environments. Having veteran nurses who provide support to new RNs or nurses joining a new setting can make a huge difference in easing the transition into the nursing unit and helping the new nurse feel more at ease. This support can lead to better care for patients, which is the goal of the profession.

Veteran nurses, hospitals, and nursing organizations are creating initiatives to help new nurses hit the ground running in a positive environment. One of the initiatives is a play on the oft-used and deriding term, “Nurses Eat Their Young,” instead creating a new campaign called “Nurses Support Their Young.” The new slogan is traveling across the country on social media as well as on Nurse.org. There, the petition to create a better working environment mentioned earlier in the article has received 8,956 signatures as of November 2018, with a goal of 10,000.

One of the petition’s founders, a social media influencer known as Nurse Blake, said, “As other nurses follow in our footsteps, we need to always inspire, motivate and help them. We are all in this together.”

In a spin off a line from the movie, “Finding Nemo” signs have begun appearing in hospitals with the line, “New employees are friends, not food.” It’s a reminder to veteran nurses that the new people coming in aren’t competing for their jobs and deserve to be treated with respect. In addition, some hospitals are now offering educational sessions for staff members on bullying and workplace hostility. These sessions help break down the stigma around bullying in the workplace, creating a more trusting, open environment with better communication among staff and bosses.

Nurses and other hospital staff are also learning about how to recognize and prevent bullying at the workplace. They are becoming nurse mentors and providing advice, such as taking a stand against a bully when they see that behavior and reporting it to upper management or going to HR to diffuse an issue between co-workers. It’s also been emphasized that it is important for nurses to ask during interviews about a healthcare organization’s policy on workplace culture to ensure there’s a process should bullying occur.

The nursing industry taking a stand against bullying couldn’t have come at a better time. The U.S. Bureau of Labor Statistics has projected nearly a half million new nurses will be needed in the healthcare field by 2026, which is likely due to the aging baby boomer population. It’s expected that as they age, they’ll require more medical care in addition to the number of nurses of that generation reaching retirement age.

With 15 percent growth expected in the next decade, you’re going to have a flood of new nurses on your team. Become a nurse mentor to them as they adjust to professional life with your RN to BSN online from King University. In as little as 16 months, you can graduate with your bachelor’s in nursing and advance your career into further leadership roles.

Our fully online format allows you to balance your education with your busy life as a nurse, and we are accredited by the Commission on Collegiate Nursing Education. Nurturing future nurses and ensuring a quality work environment is a priority at King. Our program rests on the pillar of civility, and we encourage all our students to be polite, respectful, and purposefully kind in verbal and non-verbal interpersonal communications and behaviors.