The Major Branches of Psychology

The Major Branches of Psychology 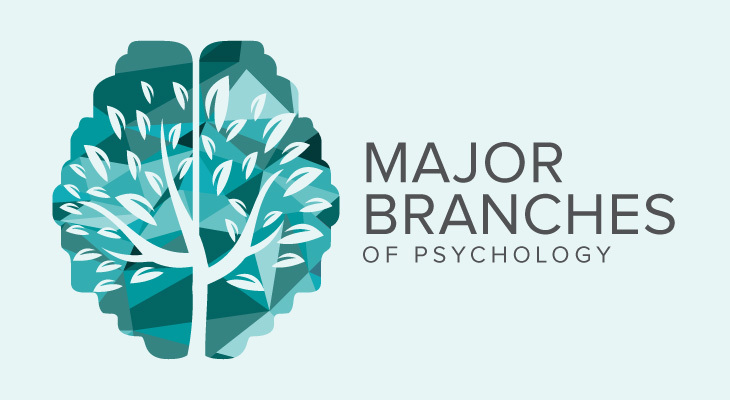 Through careful observation, psychologists around the world study the connections between our mind, behavior, and surrounding environment.

Recognized independently from philosophy since the late 19th century, the field of study has quickly established itself as one of the broadest scientific disciplines. From researching unusual behaviors to helping athletes harness their peak performance, psychologists work in a wide-range of settings. This variety is likely the reason psychology is one of the fastest growing fields in the U.S., with careers available in many of its subsections.

In this guide, you’ll learn about 16 select disciplines within psychology, career options, and famous psychologists or scientific discoveries from each. With all the information available, it will be much easier for you to determine which type of psychologist you want to be.

Abnormal psychology dedicated to patients who display abnormal behavior or thinking. Abnormal behavior is considered conduct that doesn’t comply with societal norms, which can include mental illnesses such as bulimia or schizophrenia. Psychologists in this field try to understand what causes unusual behaviors in people, whether it stems from a biological origin (nature) or learned through experiences (nurture).

An early founder of behavioral psychology, John B. Watson is arguably best known for the Little Albert experiment. During this experiment, a toddler dubbed Little Albert was trained to expect a loud, jarring noise whenever he played with fluffy objects. This experiment for the learning process known as classical conditioning, the idea that animals can be conditioned to expect a certain outcome when presented with a specific situation. The study of classical conditioning can explain how people develop phobias or other irrational fears or beliefs.

Dr. Barbara Roberts, a clinical psychologist, became one of the first psychologists to treat players in the National Football League (NFL) after reading about how a player’s night of drinking ended in a car crash. Now, Roberts works with players across the league who are at risk of using or are currently using drugs.

Concerned with mental processes, cognitive psychologists study the human thought process and how people obtain, process, and store information in the brain. These psychologists conduct experiments and research to study memory, perception, and learning. They work to better understand the mind and find solutions to memory loss, learning disabilities, and other cognitive issues. While many cognitive psychologists work mainly in researching and studying the brain, some provide therapies to patients, such as those who suffer from dementia.

Prospect theory, developed by psychologists Daniel Kahneman and Amos Tversky, attempts to explain how individuals decide between two alternatives where risk is involved, and the outcomes are unknown. Kahneman and Tversky found that contrary to classic economic theory, which assumed subjects would always make rational decisions, people were more likely to choose a potential outcome with certainty over one with more risk. For example, a person is more likely to accept $50 with no or little risk involved than if they were offered a 50 percent chance at $100.

The theory of learned helplessness, developed by well-known psychologist Martin Seligman, states that people and animals who have been conditioned to expect negative responses assume there will be another negative response waiting for them, even in a different situation, and are unlikely to attempt to change their situation. This landmark theory has helped doctors and psychologists better understand how depression forms. Seligman’s later work on happiness has also been used extensively by counseling psychologists.

Developmental psychologists have helped us better understand how people mature over the course of their lives, both emotionally and physically, studying human development from birth until old age. Specifically, psychologists take an in-depth look at biological growth of the body, cognitive expansion and emotional maturity, among other areas of study. When working with patients, developmental psychologists assess and diagnose to treat various issues, such as developmental delays in children. Some of these delays are common, and a psychologist could diagnose therapy to help the child catch up or just observation to see how the child improves on his or her own.

One of the most famous developmental psychologists is Jean Piaget. The Swiss professor’s theory on cognitive development in children has been put into practice across the world. Piaget theorized that children learn best through experience, actively exploring and discovering new items and outcomes to save in their memory banks and use as building blocks for more exploration in the future. In contemporary times, Piaget’s theory has led to more interactive classrooms and museums to increase childhood learning.

Educational psychologists study factors that impact learning, including learning methods and how information is processed and absorbed. Memory, concepts, and individual differences all affect how a person learns. In researching these processes, psychologists apply theories of human development to better understand how to improve the instructional process. Educational psychologists, who can work in a wide range of settings including in primary and secondary schools as well as universities, could provide counsel to students who struggle to learn with disorders such as Attention Deficit Hyperactivity Disorder (ADHD) or Dyslexia. ADHD can affect a student’s focus on important classwork while dyslexia can affect reading fluency, comprehension and spelling, among other symptoms.

In the early 1900s, John Dewey argued that education and learning are fundamentally social and interactive processes. He believed that comparing what students had learned in class to their past experiences created a stronger bond in the brain’s memory bank. Dewey’s writings and theories of education are still being used in schools across the nation.

Ernst Heinrich Weber conducted landmark research on sensation and touch that led him to the “just-noticeable difference,” or the idea that people begin to notice a difference between two objects when it becomes relative, not absolute. In action, Weber found that on average a blindfolded person could not tell the difference between holding two weights until the weight in one hand changed by as much as 10 percent.

Forensic psychologists work in the intersection of the legal system and the field of psychology. They often conduct evaluations and research that help guide legal proceedings. This can include evaluating a defendant for competency to stand trial or helping train police officers and first responders on how to properly handle criminals and crime scenes. While many forensic psychologists work within the legal system, some work in threat assessment, which is the scientific approximation of whether a person will become a threat in the future.

Margaret Bull Kovera determined that victims are more likely to make an identification in a police lineup if an officer who was involved in the case conducts the lineup. Kovera found that non-verbal cues from the officer often trigger identification and could lead to false identifications.

In 1977, George L. Engel developed the biopsychosocial model, or the idea that biological, psychological, and social factors influence disease and illness. In time, this has become the model used by health psychologists to study how and why people get sick. These psychologists help people make choices that have a positive impact on their health, as well as that of their families and communities. Their patients range from those with genetic disorders to substance abuse issues. Health psychologists also treat psychosomatic illnesses, (DEFINITION), such as emotional eating.

One of the leading voices on the fight against obesity is health psychologist Kelly Brownell. Brownell’s research and published works have encouraged higher taxes on unhealthy food and drinks to discourage consumption.

Build a Foundation for Your Psychology Career

Build that foundation today with King's online BS in psychology. Designed for adult learners like you, our online program gives you flexibility to balance your education with your busy life.

Human factors psychologists use research to improve transportation, consumer products, telecommunication, technology – nearly anything and any system with which humans interact. Their goal is to create safer and more effective systems by better understanding people’s expectations and how they interact with products and technology. These psychologists conduct research and consult with companies on how to ensure a safe working environment for employees.

Human factors psychologist Dawn Shaikh works for Google. Shaikh and her team of computer engineers research and design fonts that are globally appealing and easy to read in multiple languages.

Following the work of Freud and others in the field of psychology, Erik Erikson developed a theory to help explain how a personality is formed across an entire life. Erikson theorized that people suffered eight crises in eight stages of their lives, and successfully navigating them would lead to a positive personality.

Creating a safe and healthy school environment is the goal of every school psychologist. These psychologists focus on helping find the best environment for student learning as well as helping teachers or students find their optimal learning space. They study social, behavioral, emotional, and academic factors to find the best situation for students. They also conduct research on the best practices for school policy and make recommendations for school administrators to adopt.

Social psychologists strive to understand individual behaviors and personalities within a social context. Psychologists in this branch study the social factors that influence how people act and the condition in which those actions occur. Most social psychologists research and observe social influence, group processes, prejudice or discrimination, and stereotypes. Over the years, social psychologists have helped better the understanding of people’s attitudes, willingness to conform to a group, and social decision-making.

In 1924, Floyd Henry Allport’s “Social Psychology” provided the backbone for the contemporary study of social psychology. In the book, Allport argued that social behavior was a result of interactions with other people and not a predetermined aspect of one’s personality, which was then the major theory at the time.

A former Olympic gold medalist, JoAnn Dahlkoetter went back to school following her athletic career and became one of the leading voices in sports psychology. Dahlkoetter has published books and works with Olympic athletes as well as others in high-stress jobs on how to succeed through the mental and physical pressures they face on a daily basis.

With more people interested than ever in learning about how the mind interacts with the body, it’s no wonder that psychology is one of the fastest-growing careers in the U.S. The Bureau of Labor Statistics reported in 2017 that the field is growing at twice the national average, a 14 percent rate, with 23,000 new jobs expected to be added to the work force by 2026. The BLS reported that psychologists across the board earn a median average income of $77,030.

There’s a wide range of employment options for psychologists, including:

There are many benefits to becoming a psychologist. In addition to the salary figures, psychologists often work with patients one-on-one and assist in improving their conditions with treatment and interventions, which creates a positive impact on their lives.

Your bachelor’s in psychology provides the foundation for your psychology career. Build that foundation today with King University’s online BS in psychology. Designed for adult learners like you, King’s online program gives you flexibility to balance your education with your busy life. With qualified transfer credits, you can complete King’s program in as little as 16 months.