Comparing the Biomedical and Psychotherapeutic Models of Mental Illness Treatment

Comparing the Biomedical and Psychotherapeutic Models of Mental Illness Treatment

The history of mental illness treatment is lengthy, with methods constantly changing to keep pace with medical and technological discoveries. But during the 19th and 20th centuries, clinicians learned more about mental health care than ever before. Lithium was discovered in 1817, Sigmund Freud introduced psychoanalysis in the late 1800s and tranquilizers replaced lobotomies as the predominant treatment of mental illness in the mid- to late 1950s. In 1952, the first antipsychotic medication, Thorazine, was developed. Later in the same decade, behavior therapy was introduced to help people overcome phobias. Deinstitutionalization and the study of genetics brought the mental health field into the 21st century, but advancement didn’t stop there. The question of how best to treat mental disorders remains an ongoing debate. Perhaps the most contentious issue is whether the biomedical or psychotherapeutic model is more effective.

The biomedical model of abnormal psychology is built on the assumption that mental disorders have a physical cause. Supporters consider the symptoms associated with conditions like major depressive disorder and anxiety disorder to be caused by a physical problem in the brain. The focus of the biomedical approach is on genetics, neurotransmitters, neurophysiology and neuroanatomy; it argues that mental disorders are related to the physical structure and functioning of the brain[1] . This means that behaviors such as hallucinations and suicidal thoughts are symptoms, and clusters of symptoms that commonly appear together allow psychiatrists to diagnose a particular condition.

What Do Psychiatrists Do?

Psychiatrists[2] are the mental health professionals who primarily work under the biomedical model. They are medical doctors who specialize in “the diagnosis, treatment and prevention of mental illness, including substance use disorders,” according to the American Psychiatric Association. The diagnoses psychiatrists make are based on paradigms established in the Diagnostic and Statistical Manual of Mental Disorders (DSM). As practicing physicians, these specialists have completed medical school and residency training in psychiatry and can prescribe medication.

Does the Biomedical Model Work? Effectiveness, Strengths and 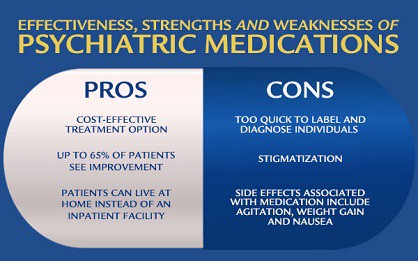 Psychiatric medications have been established within the medical community as a cost-effective way to improve the lives of patients. Because some medications reduce symptoms quickly, they are ideal for patients in crisis. According to Harvard psychologist Irving Kirsch, up to 65 percent of patients see dramatic improvement from drug treatment, especially those with severe mental disorders[4] such as schizophrenia. Drug therapy allows such patients to live at home rather than in an inpatient facility or hospital. Other strengths of the biomedical model lie in its status as a biological science. It has reduced the stigma around those with mental disorders by establishing that they are medical illnesses.

However, there are disadvantages to the biomedical model[5]. There is concern that this model is too quick to label and diagnose individuals with specific disorders. In addition, critics point to the side effects sometimes associated with psychiatric medications. They also argue that the biomedical model provides, at best, a partial explanation of mental illness. Because of this, some clinicians take a different approach to mental health treatmentäóî what has been known as the “talking cure.”

Psychotherapy[6] is a “collaborative treatment based on the relationship between an individual and a psychologist,” according to the American Psychological Association. It is grounded in dialogue and provides a supportive environment that creates a space for the patient to talk openly with an objective, nonjudgmental professional who is licensed and trained in different types of therapeutic techniques. Often referred to as “therapy,” this treatment model focuses on helping the patient identify and work through factors that contribute to or trigger mental illness. Supporters of this approach argue that it treats the whole person, rather than focusing on a physical problem in the brain. Some key components of psychotherapy[7] include helping patients to:

What Do Psychologists Do?

Practicing psychologists[8] have completed graduate study and supervised training. They are licensed mental health professionals who have the training and clinical skills to lead different types of therapies. They consider each patient’s unique needs and seek to meet them based on the best available research. Psychologists are also trained to administer tests and assessments, as well as interpret the results. This enables them to help diagnose conditions and better understand the patient. These tests evaluate personality characteristics, neuropsychological functioning and more.

Psychotherapy can be performed in different ways. After talking to the patient about his or her disorder, psychologists determine which approach to use based on the underlying factors that may be contributing to the condition. The first of these common approaches is psychodynamic therapy, which is based on the assumption that, according to WebMD, “a person is having emotional problems because of unresolved, generally unconscious conflicts, often stemming from childhood.”

Does the Psychotherapeutic Model Work? Effectiveness, Strengths and Weaknesses

It is important to establish that the effectiveness of psychotherapy depends a great deal on the patient’s active participation. It requires time, effort and regularity. Other disadvantages to psychotherapy have to do with time. Patients can be in therapy for months or even years before making noticeable progress. Critics point out that psychotherapy alone is not effective in treating patients with severe depression, bipolar disorder, schizophrenia and other mental disorders. Because such patients often have trouble keeping track of and participating in psychotherapy appointments and need results in a short amount of time, this approach is often combined with psychiatric medications to produce a more dramatic result faster.

However, there are advantages to psychotherapy [9] as well. Most lie in its lack of side effects. Patients experience none of the physiological drawbacks that can occur with long-term use of psychiatric medications. In addition, psychotherapy offers another option for patients who have not responded well to medication. Because this approach takes the patient’s environment and personality traits into consideration, it is more personalized to meet his or her needs.

King University offers an online Bachelor of Science in Psychology that provides students with a comprehensive background in the discipline. It is an ideal educational foundation for further study, as well as preparation for future graduate education in psychology. To learn more about King University’s program, visit the online campus.