Mental illness affects the lives of millions of Americans every day. According to the National Alliance on Mental Illness[i], one in four Americansäóî approximately 61.5 millionäóî have a serious mental illness such as schizophrenia, major depression or bipolar disorder. More than 18 percent of adults, or 42 million people, have anxiety disorders. 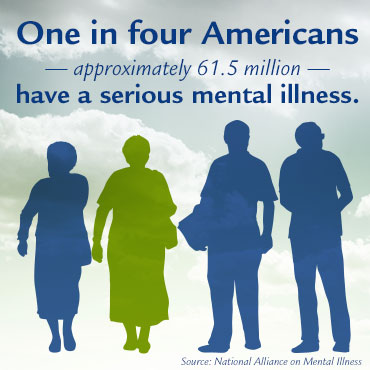 These numbers have a widespread and sometimes lifelong impact on patients and their families. Mood disorders like depression are the third most common cause of hospitalization in the United States for both youth and adults, and suicide is the 10th leading cause of death (more common than homicide).

With such staggering data, it’s no surprise that discussions about mental illness remain in the forefront of many scientific minds. Just since the 1950s[ii], experts have introduced a variety of treatments for mental illness, some more successful than others. One of the most widely accepted approaches to mental illness treatment is the biopsychosocial model. Its unique combination of methods based in biology, psychotherapy and socialization treats the whole person, making it an approach that could be the answer for the millions of Americans with mental illness.

What Is the Biopsychosocial Model?

Taking psychiatric medications prescribed by a physician or attending weekly therapy sessions are both effective[iii] in their own ways, but both the biomedical and psychotherapeutic models present their own drawbacks. For many professionals in psychology, however, the best way to treat mental illness isn’t with either of these approachesäóî it’s with both. Research demonstrates[iv] that a combination of medication and psychotherapy is often the most effective treatment. In these combined treatments, medications are used to treat symptoms while psychotherapy is used to help alleviate the problems mental disorders can cause in daily life. This creates a comprehensive strategy for combating and managing mental illness.

The World Health Organization defines[v] health as “a state of complete physical, mental and social well-being and not merely the absence of disease or infirmity.” This definition, which emphasizes psychological and social aspects of health, helped form the biopsychosocial model. The basis for this approach is that any comprehensive framework for understanding health must embrace all aspects of well-being and their interactions with biological processes.

The biopsychosocial model is a holistic approach[vi] that takes systems theory into account. It was introduced in America for the first time[vii] in 1980, along with the release of the DSM-III. The idea is that all levels of organization (for our purposes, health) are linked to one another, and changes in one level (biological, psychological and social factors) will affect all other levels. Health and illness are causes of the relationship between these three elements. This model is a framework developed by George L. Engle[viii], and it states that these three factors are “all involved in the cause, manifestation, course and outcome of health and disease.” It is the interaction between genetics, behavior and environment that determine whether a person is healthy or has a disorder. 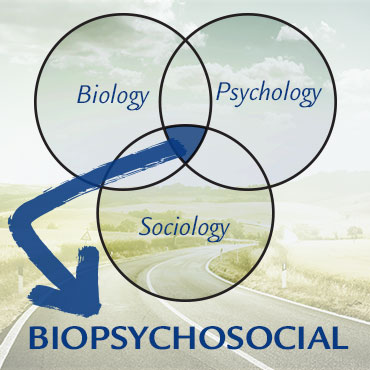 The way these three factors work together is central to understanding the biopsychosocial model. When the three are out of balance, Engle suggests that the result is almost certainly an illness or disorder. The biological influences on health and illness include “genetics, infections, physical trauma, nutrition, hormones and toxins.” Several mental disorders conclusively have a biological basis, whether due to an inherited genetic vulnerability or disposition. Schizophrenia is one such condition. In fact, according to Boundless Psychology, if one monozygotic (or identical) twin develops the disorder, there is a 60 percent chance that the other twin will also develop schizophrenia. While this data is significant, it is also important to note that 40 percent of identical twins do not develop schizophrenia. Other factors (psychological and social) also play a role.

The psychological element of the biopsychosocial model aims to explore the potential behavioral causes for mental illness, such as interpersonal problems or negative thinking. These psychological factors can interact with biological tendencies by “predisposing the patient to risk factors.” This is similar to the way social factors interact with biology and psychology. The social part of the biopsychosocial model is concerned with how various social factors influence health including “socioeconomic status, culture, poverty, technology and religion.” For example, the impact of societal expectations is well-documented as a contributor to anorexia nervosa: Western culture promotes thinness in women, and this pressure can cause an individual to fixate on body image.

Though the biopsychosocial model has always asserted that considering the three factors together is the best way to treat mental illness, a growing amount of empirical evidence is reinforcing this. Literature suggests that “patient perceptions of health and threat of disease, as well as barriers in a patient’s social or cultural environment, appear to influence[ix] the likelihood that a patient will engage in health-promoting or treatment behaviors, such as taking medication, proper diet or nutrition, and engaging in physical activity.”

When the research[x] is considered, meta-analytic reviews show that “psychotherapy and newer [medications] had equivalent outcomes in the short term,” and psychotherapy only outperformed medication in the long term by a small margin. In fact, after 16 weeks of treatment, the results were nearly identical: 58.3 percent of patients improved with cognitive-behavioral therapy and 57.5 percent experienced alleviation of symptoms with antidepressants. This suggests that a comprehensive approach to treatment (such as the biopsychosocial model) is the most useful. The combination of medication to treat the symptoms of mental illness and therapy to teach preventative and coping skills is most effective for many patients.

Under the biopsychosocial model, patients are no longer victims of their mental illnesses but are partially in control through their reaction to them. This rejects the idea that disease and illness come only from outside the body, and that illness is only caused by chemical imbalances, genetics and pathogens. The biopsychosocial model can be applied to all mental illnesses, from the most severe cases to the least.

The biopsychosocial perspective is particularly useful[xi] to mental health professionals because it offers an explanation of why otherwise healthy individuals can be affected by mental disorders, as well as why some people are more susceptible to mental illness than others. It also provides evidence that although people may be mentally healthy at one point in their lives, they can later experience mental illness if the balance of biology, psychology and social factors is disrupted. Furthermore, the biopsychosocial model enables professionals to “apply every aspect of a patient’s life to their illness.”

Get Started With King University

Though many mental health career paths require master’s and even doctorate education, there are also a wide variety of options for those who hold a bachelor’s degree in psychology. King University’s online Bachelor of Science in Psychology is designed to prepare adult professionals with the skills they need for many careers in mental health and social services. The psychology degree program at King University teaches students key competencies in psychology, communication, research and critical thinking.

This comprehensive background of study prepares students for careers in this growing field. Learn more today by visiting the King University online campus.